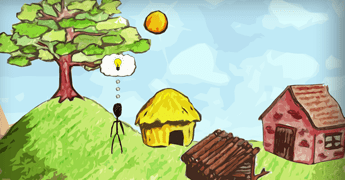 There’s no shortage of good ideas.

But there is a shortage of people who believe in their ideas so fully that they put in the necessary work to pull their ideas out of imagination and into reality.

Everyone who’s ever taken a shower has an idea. It’s the person who gets out of the shower, dries off and does something about it who makes a difference.

Chances are, your idea is good enough. In the back of your head, you already know that.

But nobody else knows – and the never will unless you build on it.

Starting several businesses and finishing none of them will get you nowhere in a hurry. So focus your attention on one good idea and see it through to completion.

5 Inspiring Quotes about Ideas for Entrepreneurs

Ideas are the beginning points of all fortunes.

Billion dollar businesses like Apple, Facebook, and Google all began in tiny brain cells. Pretty amazing. Of course, those brain cells all belonged to highly-motivated and hard working people.

We think good ideas to death, when we should be acting them to life.

Bringing your ideas to life in your imagination may be fun, but bringing them to life in reality is much more satisfying.

Don’t worry about people stealing your ideas. If your ideas are any good, you’ll have to ram them down people’s throats.

Truly world-changing ideas are often met with doubt and apprehension… at first. So if your idea faces criticism early on, take heart: so did the the bicycle, the iPad, and the microwave oven.

Ideas are not yours. They’re in the common consciousness. But how you perceive an idea is yours.

Don’t assume just because you had an idea that it’s yours to keep. Somebody else may have the same idea any moment and then beat you to the punch, so it’s better to act on your idea ASAP.

On the other hand, don’t be discouraged if somebody else has already enacted an idea very similar to yours. You can bring your idea to life in a better or maybe just different way. Remember that Facebook was predated by MySpace, SixDegrees, and Friendster.

Don’t be afraid of new ideas. Be afraid of old ideas. They keep you where you are and stop you from growing and moving forward. Concentrate on where you want to go, not on what you fear.

“Ideas are just a multiplier of execution.”

The concept behind the above Derek Sivers quote is simple: no matter how good an idea is, it’s worthless unless it’s well executed. The iPod wasn’t the first portable mp3 player. That honor goes to the Audio Highway Listen Up. But only 25 Listen Up’s were ever made. The iPod, on the other hand, has sold over 300 million units. That’s the power of good execution.

Partially executed entrepreneurial ideas don’t make money, just as houses without roofs don’t provide shelter. So don’t give up on your brilliant idea until you’ve truly given it an opportunity to be successful.

If you truly believe in your idea, start building – one brick at a time — and don’t stop until you’ve completed it.