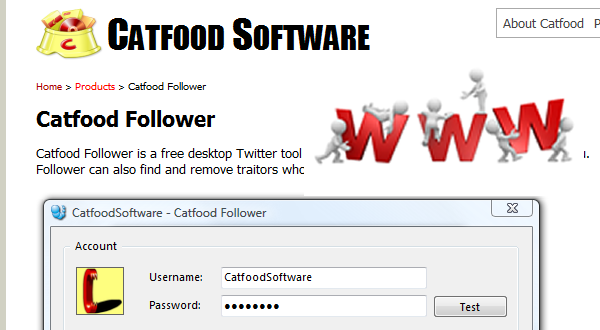 Catfood Follower is a free desktop Twitter tool for automatically following
people that follow you. Follower can also find and remove traitors who
don’t follow you back.

Follower supports any number of Twitter accounts. API limits are handled gracefully even for
users with a very large number of followers.

Auto-follow rules include exceptions for users you don’t want to follow and
optional Klout integration so you only follow users above a certain
Klout score.

Auto-remove rules include both exceptions and a grace period. Exceptions allow you to list users that
you want to continue to follow regardless of if they return the favor or
not (either account by account or using Twitter Lists). The grace
period means that people you start to follow are given some time to
follow you back before they are considered as candidates to remove.

Note that you must authorize each unfollow from Catfood Follower Settings
(click the Unfollow button) to comply with Twitter’s terms and
conditions. Optional Klout integration allows you to remove users below a
certain Klout score even if they are following you back.

Follower can be run in test mode to show you the changes that will be made and
in live mode to actually follow and remove users according to your
rules. It’s also possible to use Task Scheduler to run Follower
automatically