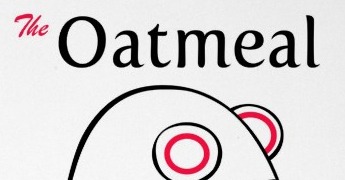 Some bloggers toil for years trying to get noticed. Others, like Matthew Inman of The Oatmeal, attract five million monthly readers before their blog’s first birthday.

Below, I’ll profile Matthew Inman, tell the story of how he started The Oatmeal, and how he’s turned it into a $500,000 per year online business.

How The Oatmeal Began

Early in 2007, Inman decided to create a free dating website called Mingle2. In order to drive traffic to the site, Inman began creating web comics and quizzes with names like, “The 8 Phases of Dating” .

The content was unique, fun, and very viral. Before long, Mingle2 had attracted a huge user base and was winning the search ranking war against established sites like eHarmony and Match.com. It wasn’t long before one of them made an offer to buy out Mingle2 – and Inman happily accepted.

He stayed on making viral content for the dating site, but he wasn’t totally satisfied with his work:

“My creativity was kind of being controlled and marketed and it was this vehicle for something else. I really didn’t like that. It would be like having a concert pianist do Gatorade commercials.”

That’s around the time when one of Inman’s comics (How to Tell if Your Cat is Plotting to Kill You) blew up so big that he couldn’t ignore it. He decided that he had what it takes to be a comic writer full-time. In July 2009, Inman launched TheOatmeal.com with three comics – and within a year it had 5 million visits per month.

Now, onto how Inman creates content, drives traffic, designs, and monetizes The Oatmeal.

In a five minute Ignite Speech, Inman gave a some simple advice on how he creates the content that had five million people reading his website per month before it was even a year old.

Here it is in bullet points:

“Brain-farming” is what Inman calls his creative process. He described the concept to The Chicagoist thusly:

Inman credits his realization of “brain-farming” to a scene in the television drama Mad Men (one of my personal favorites). The show’s lead character, Don Draper, is the creative director of an ad agency and he gives this advice on overcoming writer’s block: “Just think about it. Deeply. Then forget it. And an idea will jump up in your face.”

The creative process is a mysterious beast. Sometimes the only way to think up a brilliant idea is to not think about it at all.

It’s hard to spend much time on The Oatmeal’s site without reading a comic about Siracha Hot Sauce. Your cynical side probably assumes that this is paid advertisement content. But the truth is that Matthew Inman writes comics about Siracha simply because he loves the product.

In fact, Inman has denied lucrative opportunities to make advertisements out of his comics. Inman told the Washington Post that he turned down a deodorant company because, “It’s pretty much got to be a truly exceptional client. If it were Comedy Central, I’m all over that. Maybe if it [involves] an actor or actress I like. But Diet Coke, that’s not gonna happen. The money would be great, but the detriment to my comic would not be.”

Integrity – it’s a big part of the reason Inman has been able to create such a massive and loyal online following.

The Oatmeal comes in at the top of a Google search for ‘oatmeal’, above Wikipedia and Quaker Oats. In fact, Inman’s comics do very well with Google, always ranking near the top.

So The Oatmeal gets plenty of traffic from search. But it isn’t because the site’s so well optimized for search:

“A lot of people say: ‘How do you do it?’ I just make things that people like. SEO has no bearing on the Oatmeal — I did SEO in my old job [so I know] — but social media has played a gigantic part in what I do.”

The Oatmeal’s content ranks well because it’s heavily trafficked and shared by visitors and heavily linked to by bloggers and authority sites. In Inman’s case, content really is king.

The Oatmeal initially got traction through sites like StumbleUpon and Digg, which Inman has called “very powerful.” Today, The Oatmeal has over 700,000 fans on Facebook and 315,000 on Twitter.

“Building and hanging on to an audience is the biggest role of social media. Then every time I make a comic, I can broadcast it out to them. That’s been really helpful. I have this audience waiting for me. It’s been awesome. … You need to be funny and continually make them laugh. But when I started, I also had this [casually inviting] tone: ‘Hey, guys, I just made a new comic — check it out!”

Easier said than done, right? Well, luckily Inman’s already written a funny take on “How to get more likes on Facebook”.

Rally Around a Good Cause

If you just heard about The Oatmeal in the last few months, there’s a good chance it’s because he was raising money for a charitable cause.

It all started in May 2012, when Inman received a letter from lawyer Charles Carreon, of FunnyJunk.com. The letter threatened to sue The Oatmeal for defaming FunnyJunk and asked for payment in the amount of $20,000.

Inman was having none of it (the whole row had started because FunnyJunk was posting The Oatmeal’s content without his consent) and instead decided to try to raise $20,000 for The National Wildlife Federation and The American Cancer Society through crowd-funding site Indiegogo.

Instead of raising $20,000, Inman’s campaign raised $220,024 – largely for two reasons:  (1) the viral nature of charity (people are more likely to share if it’s for the greater good) and (2) because it incited a firestorm of media coverage (including stories on sites like Forbes and Ars Technica). 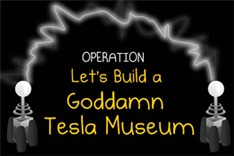 Not two months later, Inman is in the midst of a second fundraising campaign, this time to help build a Nikola Tesla Museum in New York. This one’s even bigger than the last:  28,000 people have already donated $1,157,294 for Tesla and there are still 32 days left in the campaign.

You can donate here.

I’m not suggesting for a moment that Inman took on these noble causes because he wanted to drive more traffic to his site. But both campaigns have only raised The Oatmeal’s profile and earned him more die-hard fans. It’s certainly nice as a blogger that doing good is so good for you. 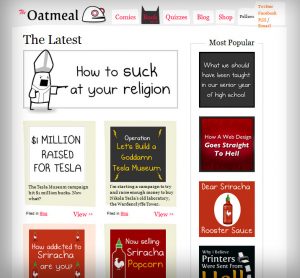 Inman is a graphic designer and most posts on TheOatmeal.com are comics, so it makes sense that the site’s design skews toward the visual.

His tile-with-a-headline approach is very economical with space and it allows his home page to show 25 posts without looking anywhere close to cluttered.

This design choice plays a big role in how “sticky” TheOatmeal.com is (a website is “sticky” when a visitor spends a lot of time there visiting multiple articles). At the bottom of each post, after the comments there are eight of these tiles – each one inviting the visitor to click on its clever headline.

The Oatmeal’s header area is less than 70 pixels tall. A larger header can make a strong visual statement and grab people’s attention, but The Oatmeal’s short header leaves more room above the fold for people to see post images.

Instead of the traditional email opt-in form with a field to input your email and a submit button (see Income Diary’s “Get Weekly Updates” box on the right of this page) The Oatmeal simply offers a pair of text “Email” links that take you to this page:

It wouldn’t surprise me if Inman could get more email subscribers with an ever-present opt-in box on each page, but doing it this way is less pushy and it ensures that everybody who is on his list truly wants to be there.

The Oatmeal First Monetized with Donations

Once The Oatmeal to start receiving enormous amounts of traffic, the image-heavy site was costing him, “a couple grand a month in hosting fees.” Inman didn’t have a monetization plan yet in place, so he put up a simple Paypal donation button and the words, “Like The Oatmeal? It’s a one-man operation, so buy me a cup of coffee.”

Inman told The Chicagoist what happened next:

“I did the donation thing, and I thought I would get a couple of dollars a day, but I was getting a lot of traffic and it ended up being much more than that. I actually felt guilty, and I thought I should be giving them something in return, and that is when I decided to start selling merchandise—posters and stuff.”

Inman was in fact earning hundreds of dollars a day. It was more than enough to pay the hosting fees, but he was nowhere near his current figure of $500k per year. That income would come from his next monetization strategy.

Today, about 75% of The Oatmeal’s profit comes from merchandise:  informational wall posters, greeting cards, calendars, clothing, coffee cups, signed prints, stickers, magnets, badges. Inman is also the author of two books, which he’s supported with national book tours (5 Very Good Reasons To Punch A Dolphin In The Mouth (And Other Useful Guides) and the upcoming How to Tell if Your Cat is Plotting to Kill You.)

Danny Bradbury of The Guardian offers this informed analysis of The Oatmeal’s earnings from merchandise:

Inman uses a ‘Shop’ tab at the top of his site to sell his products, but he’ll also occasionally include information about products in his posts. Inman revealed to The Washington Post his most successful products:

“The highest-selling item in my store are the posters. The educational ones, like the grammar posters, are funny but good to have up on your wall. [In fact] the entire public-school system in Sydney, Australia put hundreds of my posters in their classrooms.”

The Power of the Discount

We all know that a limited-time sale can increase conversion, which is why the occasional bargain is a big part of The Oatmeal’s monetization strategy. Abe Aboraya of Seattle Weekly tells the story of Inman’s first big sale:

“For The Oatmeal’s first anniversary, he had a half-off sale, expecting maybe two or three times the normal amount of orders. That one day, the store did $25,000 worth of business, 10 times the average. He had to call in his cousins to help process the orders, and it took weeks to catch up.”

The other 25% of The Oatmeal’s income comes from advertising. That may not sound like much, but it amounts to about $175,000 per year.

“I’d love to drop advertising altogether. Especially when something is not a product that fits well with my site. … I’d rather sell books and sell posters than get clicks from a machine ad.”

At the heart of The Oatmeal’s success is the unique, creative, and genuinely funny content that Inman creates week after week. He’s simply great at what he does – and it’s not because of luck, but because he had the courage to take a chance on that one thing he wanted more than anything.

But Inman succeeds in a way that other great comic writers don’t because he has forged a personal connection with his readers. He lets it all hang out, refusing to censor himself online even as he’s more and more in the spotlight. The result is a loyal following of people who trust Matt and actually feel like they know him personally.

In all likelihood, you’re not operating an entertainment website and you can’t afford to be as crass and comical as The Oatmeal. But we can all try to emulate the candor, integrity, and commitment to excellence evident in his work. That’s what sets him apart and makes him one of the world’s most entertaining – and successful – bloggers.