On the other hand, Internet research firm Sysomos reports that only 4% of Facebook fan pages ever achieve 10,000 followers…. ever!

The acronym stands for “What’s in it for me?” and it is exactly what people who visit your website are wondering when you ask them to like your page on Facebook.  Stop for two seconds and take an honest look at your website.  Have you really, truly, given them a reason to want to like your page?

If not, drop everything you have on your plate and fix the problem immediately.  So what kind of incentive can you offer?  I introduce you to the second way to make your Facebook page boom…

I have seen fan pages do all sorts of different things to get people to like their page.  Some pages offer a free eBook, others promise “Facebook only” deals, etc.  However, I have not personally found these methods to work.

The best converting method I have found for getting people to like your page is to simply explain that liking your page is the only way to become part of the “in crowd” in your community.

Here is how I do it: At the end of most of the photography articles on my website, I put a little blurb that says something like “If you haven’t joined our community by LIKING Improve Photography on Facebook, you’re missing out on half the fun!  Our Facebook page is the perfect place to ask photography questions and get answers directly from Jim.”

No need to give free stuff, no advertising needed, no need to sell a kidney or bribe a foreign official. 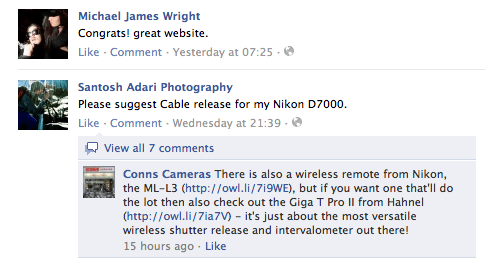 When I find a website that I like, I usually try to find their Facebook fan page so I can get their articles in my Facebook feed.  To me, it’s much easier to get my articles through Facebook than remembering to head over to Google Reader.

It is shocking to me how many website make it so difficult to find their Facebook page, and then they are perplexed why no one likes their page. Yes, this is another moment when you must stop reading and go to your site.  Pretend you’re a new user and you truly want to find the Facebook page.  How easy is it?

#4.  Create something worth liking

Huh?  I liked your page and all I get from it is a bunch of articles shoved at me each day and the occasional post where you post a video of your kid when you’re “trying to be really personable and likable”?  Yikes.  If that is your idea of creating a page that provides worth to your followers, it might be a good idea to go back and get a day job.

In my photography niche, I provide a worth-while community on Facebook by promising that either me or someone in the community will respond to any question you post on the Facebook page within 24 hours. Most of the time, one of the photography enthusiasts in the community takes care of it for me, but I also try to chime in on most posts so that I can be… yes, you guessed it… “personable and likable.”

When I release a new video tutorial, I frequently post it on the Facebook fan page a few days before releasing it on the site.  Providing seemingly insignificant bonuses to your fans this way helps to make them feel like they truly are part of the core of the community.

None of your readers are interested in anyone more than themselves, so give them what they want!  Make them feel special and that they really are in a community rather than just saying you have a community.

Every 14 days or so, I like to post a status on Facebook that I use as content for the website.  For example, I wrote a status a few weeks ago that said (remembering my niche is photography), “You might be a photographer if… (Using your comments as funny responses for an article).”

That status generated over 300 replies.  Better yet, the article was tremendously popular because my community had participated in generating it so they were great about sharing it on social media.

I have used the same technique with other posts as well.  Take this one for example, “Writing an article with 101 portrait photography tips.  I came up with about 60, but I am stuck in a rut.  Can you guys help me out?”  I honestly needed their help and they honestly wanted to play the part of the teacher for a while.  I finished the article in 15 minutes when I had spent several hours trying to come up with things.  Not surprisingly, the article was extremely popular, because they were a part of the process and I credited them for their ideas.

Nothing makes me click the “unlike” button faster than an annoying status update.  I used to live in Naples, Florida, USA.  The newspaper there, the Naples Daily News, constantly posts on its Facebook page things like “What are you guys doing this weekend?”  AAAAaaaah!  I can’t stand it!  Do they think I followed the newspaper so that I could shoot the breeze?  No!  I want the news!

Remember that every single post must provide value to your followers.  I know you’re starved for followers and you’re desperate to find something that they will respond to, but this post will only frustrate your followers and get a tiny percentage of them (who are probably starved to be asked what they are going to do this weekend) to respond.  Write about things that have value.

An example?  How about this status update that drew 200 responses in less than 20 minutes: “Since I’m the photographer in my family, there are VERY few pictures of me with the kids. Is it just me, or do you have that problem too?”

Facebook is (those of you in the UK would say “are” but let’s not start a culture war) a moving target.  Sit complacent for too long and your entire following could become useless.

When Facebook recently changed its (ug.. “their”) algorithm of what it shows in users’ news feeds, I suddenly started to see posts from pages that normally don’t appear in my feed.  Curious, I clicked on the pages and–sure enough!  I had liked the page, but I hadn’t seen their status updates in ages.

If your fans stop interacting with your page by clicking the like button, sharing your stuff, or answering surveys, then they might as well not be followers at all because Facebook will stop showing your posts in the news feeds of your fans.

So how do you get people to engage with your Facebook page?  By now you should know that you must read on…

When I notice that the engagement for my posts on Facebook has dwindled over a few days, I always call in the heavy hitters… the questions feature.

Asking questions is a terrific way to better understand your market and to get hundreds of people to interact with your page.  I frequently get 1 out of every 15 followers to engage when I post a question with polling options.  Pretty much any type of question seems to convert.

I know this point sounds like the heading on a Powerpoint presentation given by the H.R. reps in your old company, but there is one TREMENDOUSLY common mistake that I see blogs make nearly every day that makes their websites look trashy.

Take this post I read this morning for example, “10 Things I Learnt from Visiting Google.”  If you are from the UK, that probably looks just fine.  However, Americans don’t ever, EVER use the word “learnt” as a replacement for “learned” in common language.  Every American reader who saw this site today probably did what I did.  We read the headline and thought “Ick!  What a trashy article.”  Not surprisingly, we didn’t click the link.

I am still learning what words and phrases to avoid when writing for the web where 40% of my audience does not live in the United States.  If you have an international following, it truly is worth your time to learn the lingo.   I have seen many more mistakes recently where writers boldly used words that make them look like idiots to people in other countries: “torch” may be a flashlight to those in the UK, but the word means a flaming stick to people in the United States.  Biscuits, water closet, trousers, chips, units of measure, and dozens of other words are also common problems.

When you write for your website, it can be easier to write without errors and to take things like cultural differences into account; however, I see far too many great writers make stupid mistakes when they write for social media.  Make sure everything you put out on social media is of the same quality as what you put on your site.  Unlike your blog posts that can be edited later to correct errors, status updates are all or nothing.

I tried out a new technique last week that worked tremendously well.  I was writing a blog post that I thought could really go viral in the photography community.  It was entitled “12 Myths that Every Photographer Should Know.”  I think the content was good, but sometimes that isn’t enough to get traction on social media.  I needed something to really make this post go viral.

I started with something we mentioned earlier, I asked my Facebook fan page what common beliefs among photographers I should test for them.  This post alone received many responses, but it built up anticipation for the article.

Two days before the article was released, I posted a photo on the fan page that I took while preparing the article and gave a little teaser as to my findings.

One day before releasing the article, I posted “It’s almost here!  The photography myths article will be released at 2PM EST tomorrow.”  This post also got a lot of responses.

Finally, when I was ready to post the article and was a few minutes late, people were actually writing on the Facebook page frantically asking where they could find the article.  This was my signal that the plan had been a success.  There was real anticipation for this article.

Then, after the article went out and 300 people shared it on social media, I posted again on Facebook saying “Thank you to over 300 of you that kindly shared my 12 Photography Myths article on social media today.  I really appreciate the support.  In case you missed it, here’s a link to the article.”  Not only did that provide social proof that the article was good, which caused even more people to read the article, but it encouraged people to share my stuff in the future because they were thanked for their kindness.

#13.  I missed number seven on this list, and I did it on purpose

One of the tricks that I LOVE to play is to intentionally forget something or make a “mistake” on Facebook.  For example, when the iPhone 4s was announced and it was said that it has an improved camera, I posted on Facebook “Wow.  The camera on the new iPhone 5 looks really good.”

100 people wrote in to tell me that it was actually the iPhone 4s and not the iPhone 5.  It was just a small thing, but I got 100 people who otherwise would not have interacted with me that day to write something.  That means that my status updates continue to show up in their news feeds and I get the joy of refreshing the page 15 times and watching the comments pour in.

P.S. Now we get to look at the comments for this post and see how many people missed the tip about me messing up the numbering on purpose and will undoubtedly call out my “error”  🙂